ALBUM REVIEW: “Our House On The Hill” by The Babies 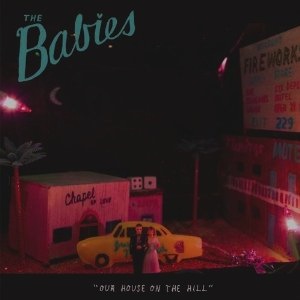 The Babies
Our House On the Hill
[Woodsist]

The Babies aren’t so much a supergroup as they are a side project with wings. Kevin Morby of Woods and Cassie Ramone of Vivian Girls delivered a concise and surprisingly affecting collection of garage rawness with 2011’s self-titled debut, arguably outdoing their marquee bands’ releases that year.

They’ve tinkered with the formula a bit on Our House On the Hill. Short songs and straightforward chord progressions still prevail. The fuzz has been brushed off but not abandoned. “Slow Walkin'” is jokingly misnamed, as it’s a playful jaunt featuring the co-founders trading vocal lines. “Moonlight Mile” blazes bright with triumphant energy. “Mean” refines the Cry Along With the Babies‘ bare bones approach. Barrel-rolling guitar and bass propel “Chase It to the Grave.” Though nowhere near the most polarizing thing in music today, Ramone’s singing voice has been declared both endearing and annoying. We lean towards the former, especially on “Baby.” The Babies must have taken those tonality criticisms to heart as Morby handles the bulk of the lead vocal duties. The move slightly saps the band of its personality and, even at 35 minutes long, Our House on the Hill nearly wears out its welcome.