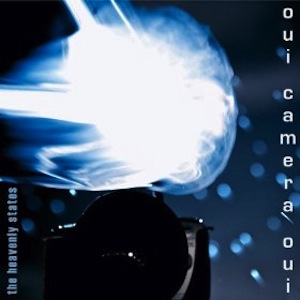 You might find it strange that my favorite track on this rockin’ EP is a 2:24 spoken word snarky take on amateurish, I’m-writing-this-from-my-mom’s-basement-so-there, reviews done by Eugene Mirman (whom you probably know from Flight of the Conchords). He does a wicked funny standup that Ted Nesseth, signer/guitarist, must love as much as I do since he accomplished his self-proclaimed mission to befriend Mirman-and get him on record mocking horrible grammar and verbiage, amongst other things. However, that epilogue is the perfect end cap to The Heavenly States (Ted Nesseth, Genevieve Gagon & Jeremy Gagon) take on life in the modern age-and they are not of the opinion that modern in this case is a good thing.

Oui Camera Oui is the first release on Hippies are Dead label (after 2008 Delayer album on their previous label) and it is obvious that it was time well spent crafting this cohesive voice that skewers CNN, drug companies, and alerts us all that the fall of the empire is nigh. Okay, that sounds dark, but the lyrics do make you think, make you react all while singing along and rocking out to the beats and hooks. If you’re a fan of angsty protest rock (Sonic Youth, Green Day) then raise your PBR and turn it up!