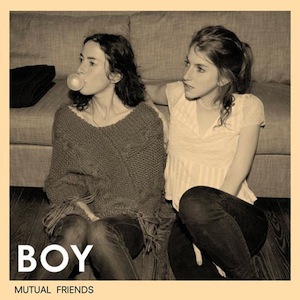 Formed in 2007, BOY, the Swiss-German duo, have finally released their debut album Mutual Friends, and it hasn’t left much to the imagination. Much online buzz has been made of their preppy production and enamouring music videos, and it’s fantastic to see the combination of so many different influences in one release.

Stand out track and lead single “Little Numbers” is entrancing with its simple lyrics, aided altogether with the charming accent-riddled melodies of vocalist Valeska Steiner. The basslines of Sonja Glass don’t go unnoticed, providing a solid backbone to the nostalgia-drenched sound of the entire album. Most notably are the tracks “Drive Darling” and “Skin,” two catchy, riff-driven songs which could easily be chart-topping singles if given the right exposure.

We remember the first day we listened to this album, and we were so engrossed in a daydream of music-induced euphoria, wondering which happy life memory we were going to assign to which song, that we mounted a curb and nearly cut our first listen short. We can only attribute this near death experience to the dream-like vocals of the leading lady, and if that doesn’t sum up our enduring love for this album, then nothing will.