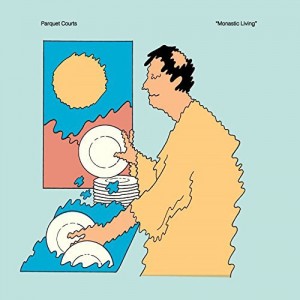 Parquet Courts are a band known to do whatever they want. Monastic Living, a nine-track “concept EP,” sees the Brooklyn-via-Denton band actively rewriting the “voice of their generation” label the indie presses hastily tossed their way following 2012’s Light Up Gold success. The band, by their very own performance and personality, has become the definition of punk, and Monastic Living is a testament to that. The band gave no pre-release interviews. The vinyl comes with a one-sheet liner note, where the EP’s only lyrics are scrawled. In opener “No, No, No!” Andrew Savage refuses praise that critics have heaped upon the band: “I don’t want tabee calda poet/I don’ twantew hang in a museum.”

For fans of Gold and Sunbathing Animal — albums that brought the band into the rattling and overbearing indie rock spotlight — Monastic Living can be a tough-listen. But that’s kind of the point. For one thing, it’s abstract: besides the yelping on “No, No, No!” there are no vocals, each song being delivered in overdriven conversing guitars. You’re left in the sonic deep-end before being thrust into “Monastic Living,” a dizzying display of churning guitars which deconstruct themselves to a point of standstill, before DNA-transforming to become an entirely new beast. “Alms For the Poor” is short-lived old-fashioned Parquet Courts, complete with acerbic catharsis you can almost taste; “Prison Conversion” is Can meets Sonic Youth in a stew of drones and internal mimicry.

Monastic Living is the most challenging work Parquet Courts have ever released, purely because the four dangerously intrepid members had the ability to explore unpleasant corners of their minds, forging a micro-niche of the post-punk world for themselves. They’ve once again tested their limits, and the result is nothing short of full-breath punk experiment.