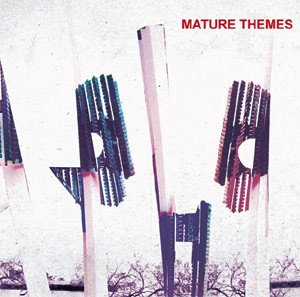 In this ever-growing world of music, there are certain artists who can’t be described by words alone and need their music or live performances to speak more for them instead. Ariel Pink is undoubtedly one of those rare and unique musicians, and after the huge success of 2010’s Before Today, both fans and critics alike were waiting to see just what would come next from Ariel Pink’s Haunted Graffiti.

Mature Themes is the second official Haunted Graffiti release and while the album does still retain some pop sensibilities of its predecessor, it’s certainly more of an acquired taste that may require several listens to fully sink in. With that being said, this album is every bit as odd as it is brilliant. Whether he’s talking about ordering schnitzel at the drive thru (“Schnitzel Boogie”) or declaring himself a nympho (“Symphony of The Nymph”), the lyricism on each track will surely get your brain stirring. Musically, the band seems to dwell in a mix between haunting ’80s era funk, shimmering new wave, and lush AM pop — and it certainly adds to the diversity and appeal of the record.

With Mature Themes, it’s evident that this group has pushed the bounds of anything they’ve done before and regardless of if you love or hate it, it will definitely leave an unforgettable impression.