ALBUM REVIEW: “Master Of My Make-Believe” by Santigold 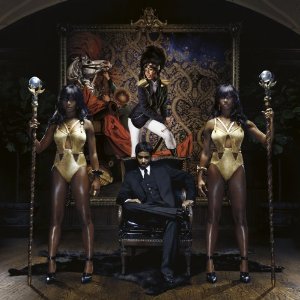 Santigold
Master Of My Make-Believe
[Atlantic]

The follow-up to Santigold‘s debut album, Santogold has been over four years in the making, and in that time, the anticipation and expectations from her devoted fan-base have been steadily building. Santigold debuted in 2008 as a total innovator—she was quickly praised for her ability to seamlessly blend genres and experiment with different styles, giving us a refreshing and exciting glimpse into her uninhibited talent. When her fans finally listen to her sophomore effort, within the first two songs it will quickly become clear that this fundamental aspect of her persona as an artist has remained as strong as ever.

From the first few seconds of the album’s first track, “GO!” featuring Yeah Yeah Yeah’s front woman and fellow female powerhouse Karen O, Santi’s renewed confidence hits you hard, only to ooze from the rest of the album’s eleven tracks with equal fervor. The smooth, Jamaican-influenced sounds on the following track, “Disparate Youth,” serving as beautiful rhythmic undertones to the song’s particularly charged lyrics, help it stand out as the album’s strongest single. However, some anticipatory fans may be disappointed with the album’s noticeably more relaxed feel as a whole than her first installment (excluding of course the hip-hop charged final two tracks, “Look At These Hoes” and “Big Mouth” that stand in almost-too-stark contrast to the rest of the record), but this by no means suggests that she has any less of a voice. Other stand-out-tracks include “This Isn’t Our Parade,” “Pirate In The Water,” and “The Riot’s Gone.”

In fact, Master of My Make-Believe marks a true transition for Santigold, and the diversity between the two albums is a true testament to her creativity and innovative spirit as an artist.