“Kids In LA” by Kisses 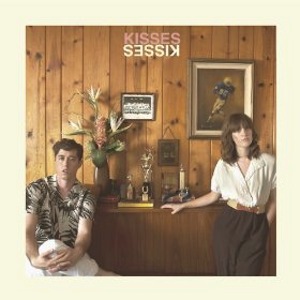 Sunny dream pop band Kisses made their debut with The Heart Of The Nightlife, a portrait of young love. But their follow up Kids In LA kicks it up a notch and focuses
on real love. Fittingly, the two members of the band, Jesse Kivel (also leader singer of Princeton) and Zinzi Edmundson, are getting hitched. The shift in their relationship shows in the album’s more serene and mature vibe.

Previously, their sound centered on a tropical groove, heavy on beachy synth and keys. On Kids In LA the duo has gracefully taken listeners from the tropics back to their hometown of Los Angeles. The album starts out with the mellow track “Up All Night.” Next, “The Hardest Part” encompasses the album’s exploration of love singing “even the best love leaves you open…falling in love is the hardest part.” Standouts include “Huddle,” “Funny Heartbeat,” and “Adjust Glasses,” the last of which features the sweet, sweet never before heard vocals of Edmundson. These laidback tracks are the sound of a band, and a couple, comfortably hitting their stride, and lucky for us, they’re ready just in time for summer.