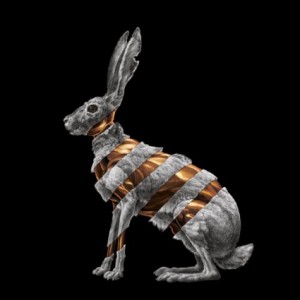 Charlene Kaye elevates the often moody tunes on San Fermin‘s Jackrabbit. Her beautiful vocal contributions highlight the intricate instrumentation, providing harmony. San Fermin works best as a balance between the understated (Kaye’s) and more brooding (Allen Tate’s) vocals. “Emily” is a horn driven lament with palpable resignation (“I can’t believe it all comes to nothing”) infused with hope through the ways that Kaye’s non-verbal vocals pair with the rising horn and Tate singing “lets forget about it/leave it all alone tonight”.

Throughout Jackrabbit, San Fermin moves from brooding and restless to silent moments of introspection. The album opens with nasal proclamations and a deep bass tone. The songs are strongest when both vocals are used. Compositions are varied, moving from the baroque pop of “Emily” to the folk guitar driven “Astronaut,” but the emotional vocals tie the narrative together.

Jackrabbit is a beautiful and pensive album. The whispered vocals and the thrilling crescendos that are built on each song, either through digital horn work or crawling acoustic guitar, are evocative and well crafted. Baroque pop works because it’s reinventing sounds that are usually confined to both the mainstream (the pop elements) and the obscure (the baroque). Jackrabbit excites with each song, moving from the subdued to the impassioned without missing a beat, and giving space to both the accomplished Allen Tate and the increasingly powerful Charlene Kaye.