ALBUM REVIEW: “In the Pit of Our Stomach” by We Were Promised Jetpacks 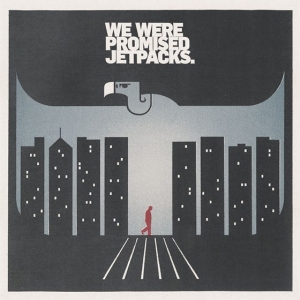 I think I’m building an immunity to shitty band names because I feel I can cut through the embarrassment of telling someone, “I’m reviewing the new We Were Promised Jetpacks album called In the Pit of Our Stomach.” and when they say something like, “Who the fuck is that?” I can retort, “Oh it’s this Scottish band with really melodic guitars, something akin to Silversun Pickups or the Killers, but the singer sounds like he’s juggling toothpicks in his mouth while singing off key the entire time. It’s really quite distracting how poor of a singer he truly is.” Then they would say, “You can’t end a sentence with a preposition and I just looked them up on my smartphone. They happen to be highly acclaimed.” Then my comeback would be, “So was Jason Mraz and his douchey (pronounced doosh-ay) fedora. And is is a verb.” That would pretty much kill the conversation and any feelings of embarrassment I might have about talking about this shitty band’s shitty band name. I mean really if you’re going to be virtually unintelligible when you sing make sure your name is Eddie Vedder. Otherwise, you’re bad at music and We Were Promised Jetpacks is certainly that. Save your money.