“In A Tidal Wave Of Mystery” by Capital Cities 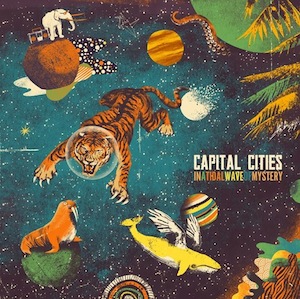 Capital Cities
In A Tidal Wave Of Mystery
[Capitol Records]

Capital Cities’ debut album In A Tidal Wave Of Mystery is the perfect collection of songs to soundtrack your summer. This twelve-track effort from the dynamic duo of Sebu Simonian and Ryan Merchant is almost equal parts new material married to early work off their 2011 self-titled EP – all five songs from the EP appear on In A Tidal Wave Of Mystery plus seven new ones. As with their first EP, Capital Cities remain true to their DIY roots with the production and mixing done entirely by Simonian and Merchant.

In our recent interview, we asked what Capital Cities’ fans could expect from the new material to which Merchant responded, “Every song on the album is very different. There is a common thread between them melodically and lyrically because of our style of writing. But every song is different and each has its own specific personality and has its own quirks and its own production style.” Collaborations are another commonality that can be added to the list. Though Simonian and Merchant comprise the creative core of the band, the guys called upon a number of artists and friends, including Soseh Keshishyan (“Chasing You”), Shemika Seacrest, and Andre 3000 (both on “Farrah Fawcett Hair”), to help their vision come to fruition.

“Farrah Fawcett Hair” is a song that begins with the voice of NPR’s Frank Taveres followed by a humorous list of “good shit” like “American Apparel ad girls,” “seeing a double rainbow,” and “Nutella.” Merchant candidly stated, “This was our fun track where we said let’s just put the most random shit in this track and not worry about it. We weren’t trying to write a regular hit, we just wanted to have fun with it.” Just as the song suggests, there is something undeniably good about “Farrah Fawcett Hair” – actually, there is something undeniably good about In A Tidal Wave Of Mystery. It’s an album that doesn’t take itself too seriously and one that provides a little optimism to help us shine a new light on the world.