"If The People Stare" by Torches 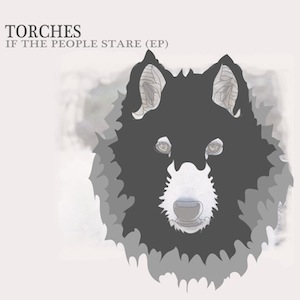 Torches
If The People Stare
[self-released]

If you are an Los Angeles/Silverlake native and have knowledge of the indie rock circle, you will know by now that Torches (formerly Torches In Trees) have self-released their new EP for free on May 6th via Bandcamp. If The People Stare captures the smooth indie sound of Los Angeles’ most musical suburb with alluring guitar hooks, swoon-worthy vocals and stormy drums. Founding members Azad Cheikosman (guitar) and Eric Fabbro (drummer) have come a long way from their first album, Head Full of Rust, working on streamlining and refining their
overall sound.

If The People Stare speaks to the hurting post-breakup soul from the first track on. “When You Gonna?” has a post-punk thrumming bass line a la Interpol, and complements the boy-girl harmony throughout (Cheikosman and Bridgette Moody, who has since left the band). “When playgrum you gonna come and visit me?” croons Cheikosman under a deceptively sweet guitar. “If The People Stare” brings to mind the urgency of Arcade Fire, and has a shimmering quality to the music that sounds as if three times as many musicians are contributing to its rich sound. May is a big month for Torches, so we hope you go and support the fellas at their Monday night residency stint at The Echo.