“Hold Fast” by The Crookes 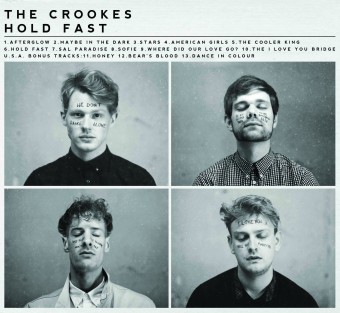 A self-proclaimed part of the budding British “new pop” movement, Sheffield guitar-pop band The Crookes is set to bring their sophomore album Hold Fast to the shores of America.

The Crookes boldly claim influence from some of the most iconic bands of British music history – The Smiths and The Beatles for starters – pegging themselves into a heritage with a lot to live up to. Do they live up to the claim? Well, not exactly. Now, we’re not saying there’s anything wrong with this album – opening single “Afterglow” is as catchy a tune as any and title track “Hold Fast” shows of the bands knack for a good hook. Later on in the record, “Sal Paradise” is a throw-back to the old-school rock ‘n roll sound that was more prevalent the groups’ debut, Chasing The Ghost, and the unexpected earnestness of the (not counting bonuses) closing track “The I Love You Bridge” shows a lyrical and vocal maturity that the rest of the album just doesn’t. Overall, there’s nothing here that’s particularly new to guitar pop music, or particularly stands out from anything anybody else is doing or has done, and the allure of the band’s youthful pop vibe quickly dulls on a second listen.

Hold Fast was first released in the UK back in July (by great indie label Fierce Panda) and clocked in at a smart and snappy 33 minutes. This upcoming American revamp features three bonus tracks, and while they are good songs – “Bear’s Blood” packs a good punch, they do destroy the brevity which was one of the album’s strong points.