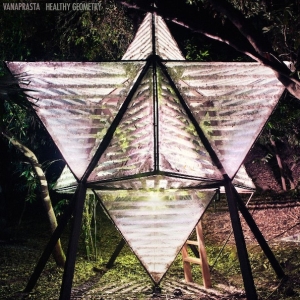 I’ll try and dismiss the truthful meaning of the band’s name as these guys being hipster cute (Vanaprasta = Sanskrit for a person who lives in the forest as a hermit after partially giving up material desires). I’ll also overlook the fact that The Hermit is the 9th card of the Major Arcana (the power cards) in traditional Tarot decks, which assumes the observation and seeking, wisdom and detachment, solitude and guidance aspects of our human nature. Don’t ask.

And never mind the three attempts it took to record Healthy Geometry, as I’ll also negate the album’s opening track, “Nine Equals Nine” as mere coincidence because this is really getting creepy. Threes and nines run rampant with this band.

What I’m left with is nine tracks and 39 minutes (yeah) of a muscular mystical trip flush with dynamic elements shape-shifting from vintage and psych guitar rock to disarming soul to blues progressive and shamelessly back again carried by Steven Wilkin’s flexible and arena-worthy vocals lyrically sketching the intimate (“Come On”) to the highly subjective and thoughtful of life (“Supernumerary”) to supernatural heat (“G-“). Throw in the random dance-happy, keys-driven pop tune with hand-claps for days that’s an ode to their favorite watering hole (“Self Indulgent Feeling”) and, voilà, you’ve got Healthy Geometry.

Yes, all of these facets supplement one another, like building blocks of a greater orchestrated and ambitious good. If you hear shades of prog rock to Kings of Leon, but with higher evolved and less robotic guitar work (dueling intricacy and finesse courtesy of Collin Desha and Cameron Dmytryk) and a far sturdier rhythm section (Taylor Brown and Ben Smiley, bass and drums respectively), then your ears work fine, but that’s not a dig at Vanaprasta. Pigeon shit and Jack Daniels issues aside, there are worse contemporaries to run parallel to, as what you hear is the sound of pure promise being fulfilled rather than pissed upon.

Although their main currency is powerfully-driven and formidable walls of symmetrically textured sound on the rock side of the street, “Nine Equals Nine” is an odd opening track choice. Odd due to the lush (translation: sensual) current of R&B that runs through it weaving a dream-like sense of mystery end to end, yet it’s a mere warm up. Where some tracks have come from (2009’s Forming The Shapes EP) to where they sonically are now is significant; the title track is almost one minute shorter; “Minnesota” picked up its pace, is bolder, and more refined. Here is producer Dave Schiffman effectively harnessing the quintet’s molecular eclecticism and unorthodox arrangements into a recorded version closely bridging the gap between their live shows. Important? Hell yes. An under-expressed Vanaprasta is that toy you play with once then forget you own; Healthy Geometry is something you’ll want to lay hands on daily.
Nine Equals Nine by Vanaprasta