ALBUM REVIEW: “Hardcore Will Never Die, But You Will” by Mogwai 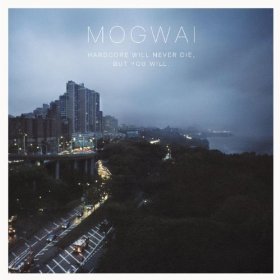 Mogwai
Hardcore Will Never Die, But You Will
[Sub Pop Records]

In my fantasy world where Giraffes are purple, polka-dotted fish can fly, and I’m a movie scorer, movies would be full of purple giraffes, polka-dotted flying fish, and have EPIC scores. As I composed my scores, I’d use my knack for identifying the types of moods certain music exudes, and force tears from the audience from my soundtrack alone. People would line up for miles to buy my soundtracks, and Steven Spielberg would fight MMA-style with Jerry Bruckheimer over who got to use my talents next. This is the scene that unraveled in my head while listening to Mogwai’s new Hardcore Will Never Die, But You Will (geez, morbid much?).

The Scottish five-piece band’s latest is refreshingly devoid of vocals, so it’s easy to get lost in the distorted electric guitar/piano/synth mash-up. At first, it seems like something you might get tired of easily, but as you close your eyes and let your imagination run, you’ll be chasing purple giraffes or whatever your brain can concoct in short-order. Track names also help direct your imagination as they’re quite descriptive for the feel of the track. “Mexican Grand Prix”, for example, is up-beat, fast tempo, and the repeated “running slow” lyric (yep, this is one of the few tracks with vocals) is humorously ironic. Then there’s “George Square Thatcher Death Party” which would make a neat backdrop for a slow-mo bullets-flying shoot-em-up climax scene where everyone dies.

If you’re an imaginative type who likes to get lost in melodic, dramatic, distortion-filled tuneage like myself, you’ve got to give Mogwai’s Hardcore Will Never Die, But You Will a whirl. The purple giraffes and flying polka-dotted fish will thank you as long as you keep them away from George Square Thatcher and his death party. Yikes.