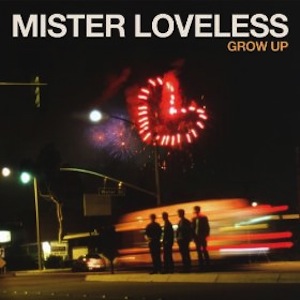 Picture a re-imagined ’90s version of “Less Than Zero” set deep in the summer months, and you have the soundtrack to adolescent ennui with Mister Loveless’ highly anticipated new album, Grow Up. Inﬂuences like The Smiths, The Pixies, and Interpol abound as you listen, but they’ve updated the post-punk sound to a cheerier beat along the lines of Vampire Weekend. Tracks like “Curfew” and “Nineties Children” (released as a single in 2011) have the tongue-in-cheek gloominess of The Smiths (“We need someone or something / to believe in / us nineties children…”) with a catchy backbeat. Their Perez Brothers-directed video for “Wild Summer” is a viral hit, winning the young band fans all over the country.

Rob Miller’s baritone vocals range from the snarl of “Punk Like Me” to the slower, more plaintive “Her Parents,” the latter tune an updated Romeo and Juliet-like story. “Vandalism Dreams” best sums up the theme of the frustrated youth, demanding to be heard as you hear “I’ll vandalize / every inch of this town / just to be heard / and I will ride / down every street in this town / screaming these words” Mister Loveless don’t have to worry about having too much time on their hands as they’ve been heavily touring Northern and Southern California the past couple of months on their own and as an opening act for veteran punk band The Vaselines.