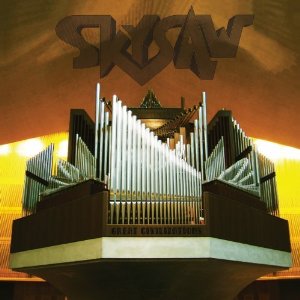 After going from project to project, former Smashing Pumpkins drummer Jimmy Chamberlin finally got to see the stars align when Skysaw came together. Although comprised of several talented guys in their own right, there is nothing individual about the process that produced Great Civilizations. The checks and balances were highly present and accounted for during this effort.

Great Civilizations is rich with drum rolls that grab your attention, convicted guitar melodies and heart-felt lyrics. The whole album is an acclamation, a moving anthem. The tracks are arranged in a way that controls the mood; one song leading up to a frenzy the next turning the mood to a more reflective tone. This owl was only too happy to go along for the ride. For example, “I’ve got a voice, I’ve got a choice and I know how to use it” in the song “Am I Second” to the very next song “Nothing’s Ever Easy” describing defeat: “The catalyst of hope, but just outside the sidelines, it disappeared in smoke.”

All 10 tracks can stand alone (especially “Nothing’s Ever Easy”: I fracking love that song!) but listen to the whole album for the emotional affair it administers. It’s worth it.