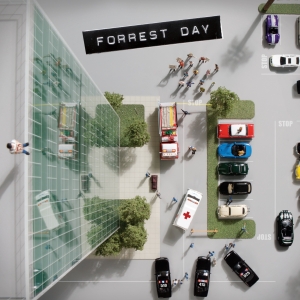 On San Francisco collective Forrest Day‘s self-titled, self-released debut, the jazzy hip-hop group brings together a number of different musical genres for a bizarre mélange that dabbles in absurdity while flaunting a promising songwriting craft.

Frontman and band-namesake Forrest Day isn’t a far cry from what Matisyahu may have sounded like if he grew up on Bloodhound Gang and Barenaked Ladies. Paired with a knack for epically varied instrumentalism, the band’s unique blend of hip-hop, rock, and a jazz sensibility that keeps predictability at bay do well to counter Forrest’s overweighted rap-sing tragic-comedy vocal stylings.

While more broadly appealing, the poppy buoyancy of Day’s rhymes detract from his more serious social commentary – such as his bulls-eye on corporate greed with “Hoarders” that delivers more punch with pensive pianos than a backdrop assault of blasting guitars (though there’s no faulting that sick little ska-style breakdown). But for every hard-hitting impact such as the aforementioned track, there’s a handful of horn-y “Assholes” which sound directly tailored for nine-to-fivers on a tropical vacation in need of some new tunes at the beach. That rare sonic sweet spot between Jimmy Buffett and 311, the musical equivalent of getting beaded cornrows in your hair. This is most definitely not for everyone.

“Everybody’s Fucking With My Mind” leans hard into Strokes territory, while Day’s lamentation over an over-medicated society on “Meds” is set on “jitter” due to the vocal melody mirroring the guitars exactly, the chorus a slow-throb urgent delivery of the song’s title. The album’s truest promise, however, arrives in the understated closer “It’s Just Me,” wherein Day documents the everyday hells of debt collectors, freeloading, unemployment, and so on with a slow-strut delivery and a beautiful chorus.

Forrest Day is a fascinating, if uneven, debut, and if you’re into Rome With Sublime, 311 and the like, this album will likely find its way into your collection. If not, there’s very little chance you’ll get much mileage out of these genre-bending marchers playing to a tune all their own. It’ll be interesting to see how these creative juices flow as time progresses.