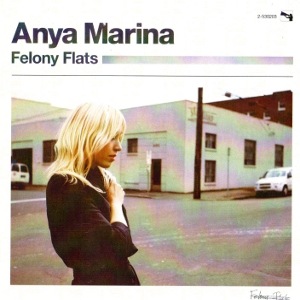 Unleashing the power of Google for Anya Marina resulted in 'zounds of music video and streaming sites with informative writings popping up in between. She blogs for HuffPo about the crazy sex life a chick performer is bereft of, unashamed and awesome in her honesty. She did a mad skilled cover of TI's “Whatever You Like” that showed up everywhere, it's that good. Her song “Satellite Heart” was on a Twilight movie soundtrack; those who know me will tell you that is not any sort of recommendation for me. On her third album Felony Flats I found this pattern repeating itself for me. There would be so much wicked awesome, then a moment of yelling at my iPod “for love of god woman, really?”

“Hot Button” and “Notice Me” are both bits of fizzy pop loveliness, dishing on the true feelings of a relationshipee. From the former we have the uncertainty we feel after the dive bomb into love: “I feel you under my collar/I feel you under my skin/Don't know what it is about this feeling.” From the latter we have the uncertain nervousness of teenagers who know not if their crush crushes in return: “Do you even notice me? Check your heart/Check your head.” “Hot Button” is one of my favorite tracks on the album,

but “Notice Me” just falls flat in a puddle of faux twee angst for me.

Strong guitar on the rock songs “Nothing To Go On,” “Flinty,” and “Speakeasy” showcase the talented artists that were able to join Anya on this ablum; guitarist Cody Votolato (Blood Brothers, Telekinesis), bassist Jeff Bond, drummer Joe Plummer (Modest Mouse, Mister Heavenly), and Blitzen Trapper's Eric Earley. The lyrics are smart, wry, and insightful, not to mention catchy. Anya can rhyme precarious with nefarious — and have it make sense! She is clearly among the coolest, erudite songsmiths I listen to. And then there is “Heart Stops.”

This song has hooks and melody that won't quit with the best guitar intro on the album and then the lyrics descend into sappy banalities: “I fell in love with everything, the stars, the sea, the moon… How could the world, the one you held so dear, just up and disappear?” I can't decide if she is being deceptively simple with the lyrics on purpose, as if her breathy voice really is coming from a child who would express loss in such a fashion or if she just couldn't think of anything else.

Anya stated that this album was deeply personal for her, “It's the one that taught me the most about myself, and it's the one that looks the most like me.” Well, in that case I have to say Anya, you look damn good — and we like the trip you are taking us on. Just no teenagers on my ride along, please.