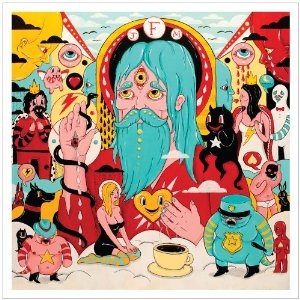 Don’t be misled by the Robin Pecknold-like, pastoral vocal croon in the opening lines of “Fun Times In Babylon,” Fear Fun‘s first track; Joshua Tillmans’s debut release under the name Father John Misty will not make you think of Fleet Foxes, the band Tillman played drums for until very recently, as much as you might expect. While rooted in the same kind of spiritual-yet-catchy folk minstrelsy, Fear Fun strives for a more eclectic take on Americana than the Foxes, reading like a playful exploration of some of Western music’s most beloved undercurrents — from blues and country to idiosyncratic 1970s singer-songwriter pop.

Tillman’s songs are beautifully arranged, busy, and melodious. The breezy “Nancy From Now On” might even be the closest thing we’ve ever heard to “rootsy disco.” While its lyrics often veer on the side of morbid and gloomy, musically the album is marked by an uplifting, swinging feel that ultimately makes some of the content come off as cleverly deployed black humor. This particular mood of “perky melancholy” subsists until the closing standout “Every Man Needs a Companion,” which resembles Cass McCombs‘ best work. Like McCombs, Tillman emphasizes the soulful, soothing qualities of roots music, and succeeds immensely in bringing solace through sound.