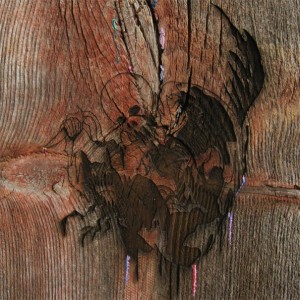 It’s been a while since Avey Tare, a.k.a. David Portner, a.k.a. 1/4 of Animal Collective, shared a solo record with the world. The gloriously murky Down There (2010) explored dark and languid realms that an Animal Collective project had not visited before (though they may have gotten close with 2003’s Campfire Songs), and left this Owl anxiously anticipating round two of the shadowy, synthy, aqueous quicksand that was Down There, sans-influence of Panda Bear, Geologist, and Deakin. Not to diss the Collective – their collaboration skirts perfection 99% of the time – but there’s something pure and somber about unadulterated Avey’s aesthetic that we can’t get enough of. Expectations were high with the reveal of Portner’s new project, Avey Tare’s Slasher Flicks, featuring Angel Deradoorian of Dirty Projectors fame and Jeremy Hyman of Ponytail. But instead of getting stuck forevermore in funereal Down There-land, the trio took its muddy, nebulous vibe and ran far, far away with it, entering a world perhaps inspired by the same foggy waters, but infinitely more turbulent. If Down There lurked in the swampland, Slasher House is caught in a chaotic river rapid.

The record is somewhat of a concept album, conjuring sonic and visual images (thanks to Abby Portner’s work on the visual album stream and videos for “Little Fang” and “Strange Colores”) of a haunted carnival. It’s creepy, but not walls-breathing ODDSAC-creepy, or Spirit They’re Gone, Spirit They’ve Vanished imaginary-ghost-friend-creepy. Slasher House is definitely weird and intricately layered, in true Animal Collective fashion, but it’s drenched in a syrupy psychedelic pop that ventures into unknown territory for the band. Structurally, the record isn’t quite as experimental as AC projects have been in the past – as it lacks a wide variation of highs and lows, generally follows a verse-chorus-verse pattern, and brings forth a noticeable decrease in sampled material. But each track is monstrous and energized, leaving little breathing room. It truly evokes the feeling of spinning upside-down in some precarious carnival Tilt-A-Whirl, hallucinogenic light show and all.

Every track on this thing hits hard; there’s somewhat of a punk influence in the live-sounding drums, reverb, and Portner’s vocal delivery. But its layered, shimmery electronic flourishes, (seriously badass) funkified bass lines, flanger effects, and angular melodies elevate the album far beyond genre categorization. Apparently Portner wrote the record when he was sick last year, which accounts for its overall dizzy, discordant, echoey, cough syrupy swagger. His ability to translate a very specific mood into sound, and wrap it all up in an incredibly inventive melody, is bottomless and continues to astound. Slasher House is a cohesive work, but each track is absolutely killer and stands alone. And as a whole it effortlessly captures a conversation between silly intoxication and the darker cobwebs lurking in the shadows. It’s tough to even choose stand-out tracks because they’re all so FREAKING good, but for the sake of argument, pay extra attention to “A Sender,” “The Outlaw,” “Roses on the Window,” and “Your Card.” This Owl is very excited to have Enter the Slasher House on continuous repeat indefinitely.