“Earnest Keep” by Alison May 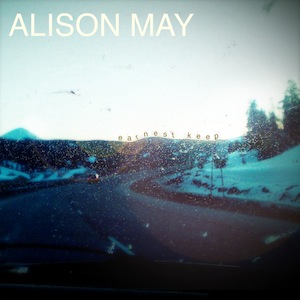 Alison May lets out a deep sigh before crooning over a strummed acoustic guitar on “Feathers For Shoulders,” and the feel of her inaugural album is at once encapsulated. In fact, the entirety of Earnest Keep is like one enormous sigh, tinged with heartbreak and expansive wonder.

May, a percussionist by trade, is a versatile singer. At her most impassioned, she howls like a female Ben Gibbard, but she prefers to hold the listener close and let her personal verses unfold at a near whisper. Songs abandon the verse-chorus distinction, instead sauntering meditatively as in the single-chord rumination of “Behind The Dam.” They’re not poorly written, just simplistically so, but this blurring of the lines robs a few tracks of potentially memorable qualities. Seekers of labyrinthine melodies will want to look elsewhere. Regardless, it’s the lyrical content that shines. “Brick” is a stinging conversation with a lover (and May’s own conscience), while “What A Life” finds her amongst the clouds asking, “is this home or heaven?”

Earnest Keep is mostly May and guitar, though tracks like “See The Fire” feature a duet with mandolin and some understated percussion. These instrumental flourishes add warmth to the LP, though sadly, they’re never used to their full potential. But even as a one-woman show, Earnest Keep remains a windswept slice of folk and a glimpse into the private thoughts of a contemplative songstress.