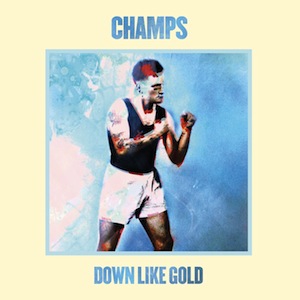 Brother’s Michael and David Champion A.K.A. Champs have been busy making melodic, atmospheric indie pop songs, with a hit of melancholy folk sentimentality inspired by the lonely seaside town in the Isle of Wight where they grew up.

First single “Savannah” has a wistful nostalgic splendour and a drifting melodious beat that rises and falls like the waves in its lyrics. Title track “Down Like Gold” is a desolate ballad, more overtly folky than most of the album with it’s rolling vocals and tinkling guitar-plucking riff. Despite what its name may suggest, “My Spirit Is Broken” is a bit more upbeat. Well, not actually upbeat, but less downbeat. Folk-ish vocalizations with a sunny hazy synth layer and a touch of Empire of the Sun is the mix. Actually, you can hear quite a range of musical influences in the duo’s music. There’s a bit of Beck and a flash of Fleet Foxes, there’s also an oddly choral feel to the carefully sung soaring vocals – see “St. Peters”. Certainly the boy’s singing prowess is not to be doubted. What could be doubted is the depth of variety and originality in the whole record, Champs certainly have there own, unique, sound… but they don’t yet seem quite confident enough with that sound to really explore it.