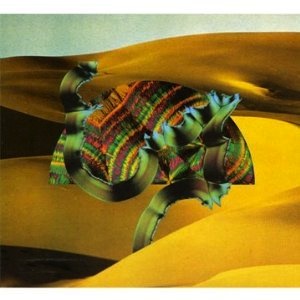 Jangly keyboard, tribal drums, and innovative percussive sounds echo throughout the self-titled debut of Django Django, a four-piece outfit who met while studying art in Edinburgh.

“Default” is a leading single and stand-out track off this ambitious album. With its avant-pop guitar riffage and clipped vocals, it pushes boundaries while simultaneously remaining aurally pleasing enough to get stuck on a loop in your head. Django Django seem to have achieved the almost-impossible, and struck the tricky balance between commercially accessible and interesting (and obscure) enough to retain credibility. The aptly-named “Skies Over Cairo” has a middle-eastern feel, and wouldn’t be altogether out-of-place on the soundtrack to Disney’s “Aladdin.” You can hear the coconuts (yes, coconuts) on “Love’s Dart,” and the percussive sounds achieved are pulsing and joyous.

Chanted and multi-layered vocals ring throughout, and this album could be played as the soundtrack to an Africana themed indie-hipster party where everyone is wearing feathers and face paint. This band has received rave reviews from British music publications such as NME and The Guardian. Django Django’s sound hits the sweet spot between indie, pop and electro, and will undoubtedly satiate our dub-loving, beat-worshipping generation of music enthusiasts.