ALBUM REVIEW: “Decapitate the People for the Government” by Damn Handsome and the Birthday Suits 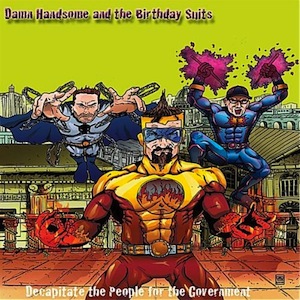 Rob Barrett is probably the biggest Bay Area legend you have never heard of. Before fronting Damn Handsome and the Birthday Suits and producing their debut album, Decapitate the People for the Government, Barrett spent almost half his life building a rather mind-blowing musical resume including a live sax performance with Miles Davis, sharing a bill (as a headliner) with an up-and-coming Rage Against the Machine, and wearing the hat of promoter all across the bay. Barrett, or Reverend Rob as he likes to be called, is a seasoned and skilled musician who perhaps needs a lesson in what punkabilly sounds like.

Decapitate… is a skate punk record with softly played, slapstick moments as heard in “Pink Flamingos” and the always-silly-no-matter-who-does-it cover of Soft Cell’s “Tainted Love.” But the marriage of humor and punk does not a punkabilly record make. This record, while lighthearted and fun despite its claim to be politically relevant, lacks the twang and croon that a lovechild of rockabilly and punk would undoubtedly have.

That being said, the record isn’t half bad. Reverend Rob’s vocals carry it believably with some definite Les Claypool influence thrown in the mix. There is also an overwhelming 90s alt presence that softens the blow of the record’s “punk” elements, which may or may not be coincidental with former Counting Crows’ drummer Steve Bowman guesting on the tracks. In short, Decapitate… may not be what it is sold to be, but you might still want to buy it.