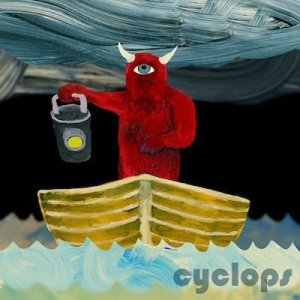 Guys like Kurt Von Stetten make me look at my own drive and productivity with embarrassment. From what I can gather, the Boston-based whiz is established in the region as a photographer and flatland BMX rider, while simultaneously churning out awesome releases with his band (The Longwalls) and solo (did I mention he’s also a multi-instrumentalist?). Von Stetten’s latest LP for Static Motor, a follow-up to 2010s excellent Pyramid, again bursts with unparalleled joy and spontaneity; it is packed with wonderfully quirky, restlessly melodious guitar pop that recalls indie rock’s best moment in a playful and condensed mishmash.

It seems that Cyclops is all about creative indiscipline: the songs rapidly pace through a good number of indie, garage, and alternative styles and tropes, never completely settling on one. “He’s No Writer” starts the album off with 1990s-influenced lo-fi rock, while “Pussy” comes close to what west coast heartwarming pop mainstays such as Grandaddy and Pinback were doing in the beginning of the zeros. At the same time, “Nature and the Vices of Man” sounds very much like the homemade high jinks of R. Stevie Moore, and the whole album is topped with an entertaining yet somewhat ill-disposed rant against indie-rock hipsters.

With Von Stetten’s shtick comes the greatest potential for criticism though: what might seem like uncompromised, free-spirited artistry to some could be, perhaps, deemed erratic and chaotic by others. If you ask me, the idiosyncracies ultimately play in Von Stetten’s favor, putting a refreshing spin on a genre of music that – let’s be fair here – has been approached from almost every imaginable angle over the last twenty five years. Cyclops proves that you can still get something fun and captivating out of it.