ALBUM REVIEW: “Country, God, or The Girl” by K’NAAN 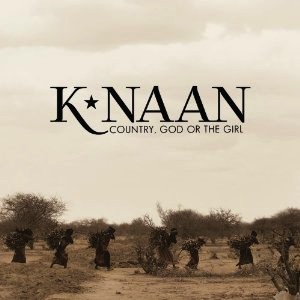 It doesn’t take a music critic to recognize that on his fourth (or second international) album K’NAAN means business, and quite literally so. Preceded by three singles and delayed over five months (it
was originally going to be out in May), Country, God, or the Girl finds the Somali-Canadian MC/poet/ songwriter/instrumentalist/activist trying to live up to his multifarious epiteths, and becoming much closer to a regular pop star in the process.

The LP sounds bigger, shinier, and more mainstream-focused than any of K’NAAN’s earlier albums, but is also his most erratic, hit-or-miss work to date. It seems challenging for the artist to reconcile the distinct aspects of his story, and–by extension–his music. The album alternates between sweeping pop choruses (“Better”), politically-tinged anthems (“The Seed”), middle-of-the-road rapping (“Hurt Me Tomorrow”), and low-key sung poetry (“Gold in Timbuktu”). Take the pair of “Nothing to Lose” and “70 Excuses” for instance. The first one is a high-energy hip-hop collab with Nas, and the second one a piece of delicate, introspective indie-pop; it’s hard to tell that they’re really coming from the same person. However, the vast range of styles and ideas might ultimately prove rewarding for K’NAAN, since we can’t imagine the album not bringing at least a couple of hits. As an artist though, he might want to consider whether he’s not spreading himself too thin.