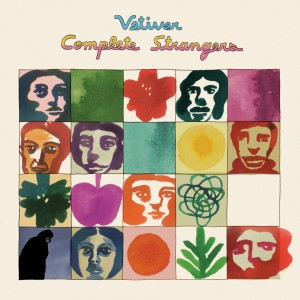 Long time San Franciscan Andy Cabic has achieved a musical Zen with his band Vetiver on their latest album, Complete Strangers. It’s the perfect morning/weekend record. It’s pretty, moves along at a relaxed pace, and feels comfortable all the way through.

Cabic was a key member of the mid 00’s Freak Folk Movement, along with fellow Bay Area native Joanna Newsom, and Devendra Banhart (a new documentary, The Family Jam, featuring the three musicians on a 2004 tour is being released in April). Thom Monahan was a prominent producer of the Freak Folk movement, and has been the one constant with Cabic over the last decade as Vetiver’s lineup has changed. And while there are echos of folk in Complete Strangers, it’s much more expansive and also sounds like the best, most chill adult contemporary music from the 80’s. Island and beach vibes are sprinkled in (“Current Carry,” “Backwards Slowly,” “Time Flies”). Synth is used sparsely and paired with guitar plucking, and ultimately some bad ass saxophone creates a head nodding pace on the seven minute opening track “Stranger Still.”

The record winds and grooves, keeping a relaxed and mostly positive and happy pace. It’s primarily free flowing, but Cabic contrasts that sound with some sadness, and more structured pop pieces like “From Now On” and “Edgar.” The latter track balances the record in melancholy. Cabic plays the wise narrator who recounts the life of a friend in their scene who was wild and burned out. It plays out like a eulogy, violins and acoustic guitar while Cabic sings “wasn’t all that wise, had a lot learn, wore a weary smile through his day, always time to burn… Couldn’t help but wonder what will Edgar do?” It could easily sound condescending but Cabic’s narrator delivers it with genuine concern and warmth. Complete Strangers finds Cabic older, but not hardened or cynical, but wise and at peace.