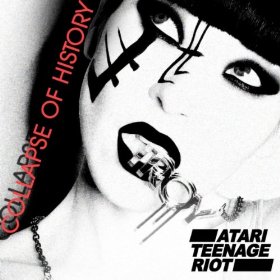 Also-rans during the electronica boom of the late 1990s, Atari Teenage Riot have unexpectedly returned as rave scene revivalists while more ubiquitous contemporaries have been unfairly treated like one-hit wonders. In the past year, Alec Empire, Nic Endo, and CX KiDTRONiK released their most accessible (read: least screechy) album, Is This Hyperreal?, and embarked on a world tour that included a stop at a little California desert music festival.

Collapse of History is a delectable slice of turn of the millennium nostalgia. Empire’s Pong-gone-punk production is some of his most captivating work since The Destroyer, and Endo’s distrustful ranting has an “I told you so” vibe in the wake of the House’s passage of CISPA. Collapse of History, however, doesn’t have much to offer beyond the radio edit and video. The Artist Formerly Known as Prince stopped at six unnecessary remixes of “The Most Beautiful Girl in the World.” Collapse of History now has eight. France’s Mustard Pimp resuscitates trance’s dreaded nnts-nnts-nnts-nnts processed heartbeat, and a pair of Hungarians known as Tits & Clits delivers an unhip muddle of hip-house and glitch funk. Listen to the original four times in a row instead.