“Coattails” by P. Wolf and Avi 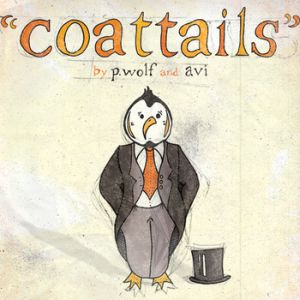 Oh raw talent, how rare you are. When I’m introduced to new music because someone knows someone, it’s usually more miss than hit. While I support any artist out there doing their thing, the truth is some have it more than others. In the case of P. Wolf and Avi and their debut Coattails, the it is so present, I couldn’t be happier to spread the word.

It might be an unfair advantage for the east coast/west coast (North Carolina and San Francisco) duo that bluesy folky singer/songwriters in particular tickle my fancy, but I like this genre because it’s immediately apparent when someone’s faking. P. Wolf and Avi, not at all. On Coattails, you can feel every lyric. Acoustic guitars and vocal harmonies are the standard fare and showcased in their many possible applications. Tracks like “Lazybones” and “I Killed Robert Johnson” are decidedly bluesy, while “Walt Whitman” and “The Avenue” really bring out the folk. Topping it off, everything slathered in soul so thick, you can eat it with a spoon.

Think of a Simon and Garfunkel meets The Black Keys duo sound, and you’ll have an idea of P. Wolf and Avi’s level of awesome. The product of two highly talented soulful song writers, Coattails is a refreshingly familiar album that will restore your faith in solid songwriting.