CD Review: This is Where I Confess by Cast of Thousands 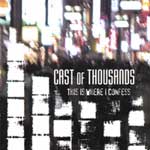 Artist: Cast of Thousands
Album: This is Where I Confess
Genre: Indie Rock, Rock/Pop

San Francisco post-hardcore indie band, Cast of Thousands, has been gaining a lot of attention lately. Their name may sound familiar; it’s the title of Elbow’s second album (a UK band lauded by U2 and R.E.M.). They may even become more familiar after a strong showing at Live 105’s Not So Silent Night local band contest.

This is Where I Confess features songs that switch between male and female vocals over catchy melodies. Highlights include “44 Frames” and “Pure as the Undriven Snow.” At times it seems as though the band has a hard time gelling together, like on “Icarii” (which has some unnecessary screaming.) Potential? Sure. Fans of Fugazi should check this band out.