CD Review: Self-titled by The Blakes 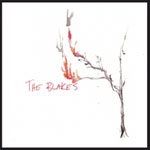 Garage rock has been taken to the curb by Seattle’s The Blakes, named after the English poet William Blake. This three-piece band is one of the most impressive and refreshing bands I have heard in a long while. The Blakes, at first, seem like a novelty band, especially having “the” in their band name – something that has plagued mainstream garage bands this decade making music fans skeptical. However, hailing from Seattle (well, actually just one of the band members is), home to the 60’s garage rock band The Sonics combined with being on a reputable indie label known for its talent (Light in the Attic Records), The Blakes show us that they are the real thing.

As far as content of their debut CD, none of the thirteen tracks exceed four minutes in length – keeping the songs tight, concise, and full of energy. Second track “Don’t Bother Me” takes the same name as the George Harrison Beatles tune but isn’t as innocent with lyrics about just wanting to make-out (typical rock star thought process). “Magoo” sounds like balls out rock ‘n’ roll Chelsea Smiles style. The Blakes show us how much depth they have with the tune “Vampire” which sounds like the band’s best She Wants Revenge impression.

The Seattle Times proclaimed that the band is “the next Modest Mouse” – not sure what they were smoking, however, I’d say they give off more of British band The Libertines vibe. Be sure not to miss The Blakes at Noise Pop Festival at The Mezzanine with The Virgins and other hip bands on March 1 in San Francisco for one hell of an indie-tastic show.