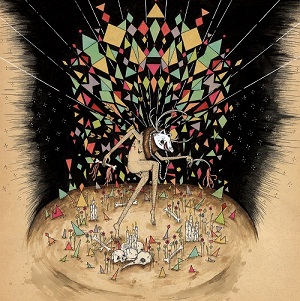 I’ve never been to Fresno, but what I do know about the town from current and former residents is that: A. it’s super hot all the time and B. it’s fairly limited in talented musicians. My dearest Fresnonians, it’s time to change the second part of that description because Fierce Creatures are here and they will blow you up.

Formed in 2009, this youthful group of rockers is now putting out its first LP, Catacomb Party on the Paper Garden Records label and hot damn if it isn’t a scorcher. I’ve had the pleasure of seeing these kiddos play live several times over the past year or so and I have yet to be anything less than blown away by their performances. A fun, raucous, and exuberant live show with lots of different things going on…often all at once. Sure there are guitar and keyboard driven songs, but with SEVEN members in the band, they will mix in pretty much any instrument or effect you can think of in order to get to their desired destination: mandolins, chimes, bells, clapping, stomping, and what I consider their “hallmark” sound some fantastic harmonized chanting. The sound is raw, but in a good way and there’s no way you can’t shimmy, shake, or head bob along. To call them “high energy” would be an understatement.

These guys are still young, so I won’t say this album represents a maturity process necessarily, but it definitely does a great job of presenting a more polished version of their frenetic live shows while maintaining a lot of that excitement. The bio on their label page calls these lush sounds “Art-Pop” and that’s actually really accurate. Check out the video from the title track below and order this baby as vinyl and/or download from their bandcamp page ASAP.

Fresno? Make that FresYES because Fierce Creatures and this album are the best things to come out of that town since, well, maybe ever. Go get it!