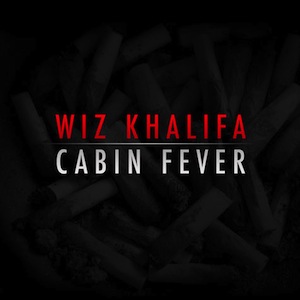 Wiz is ready to blow, if he hasn’t already, as this year’s crossover mixtape to radio rapper. Wiz has been around for several years, making fun/swagger/stoner rap tracks, most notably his work with Curren$y on the How Fly mixtape and last years awesome Kush and OrangeÂ Juice. His main stream break out happened with the Steelers-themed “Black and Yellow” hit the airwaves (Wiz is from PA), and while the song was not his best, people loved the repetition and his voice.

It’s clichÃ© in rap to boast about your car and getting ladies, but Wiz would boast about silly things like dissing someone for wearing $100 Ray Bans, and then pronounce that he was fly for wearing $600 Louis Vuittons. It was ridiculous, but honest. He chose tracks that either bounced or had a stoner groove. On Cabin Fever he opts for the Rick Ross-esque Superman synth beats that are everywhere right now, and it’s neither a great match for his talents, nor very fun. Ross excels on these beats because his voice booms and he portrays himself as an opulent super-human drug dealing hustler. Wiz has always been more of an everyman, and it doesn’t quite work as well.

The opening track “Phone Numbers” is a standout, and features an on-fire Big Sean (who singlehandedly is bringing back “boi,” as in Flavor Flav’s “yeah boi,” but it sounds cooler) and Trae the Truth. Wiz sticks with his strengths, repetition and memorable hooks. “Now when I get paid my checks be looking like phone numbers,” while Big Sean sings at the same time, “Try to talk shit bitch, I’m worth a million.” It’s strangely pretty as the piano sample plays over the beat. The rest of the mixtape is meh at best, and for the first time,Â it raises some doubts as to whether Wiz will be able to deliver a compelling full-length. His track record is more fun than boring, so there’s still hope that he may be able to put something out that is as cool as his mixtape mate Curren$y did with last year’s Pilot Talk LP’s.