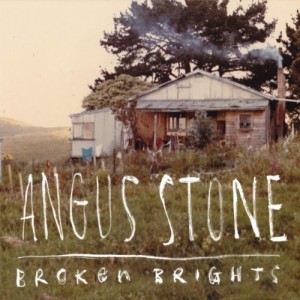 Angus and Julia Stone are siblings from a family of free-loving hippies who were weened on music, so its no wonder they went on to make music their living. As a band of two, they are extremely popular – achieving mainstream success with the song that earned them the coveted number one spot on Triple J’s Hottest 100, “Big Jet Plane.”

What remains to be seen is how much success they’ll achieve in their recent solo pursuits. They have their names working for them, but comparisons to their much-loved collaborative project may also work against them. Angus and Julia shared songwriting and singing equally within the band, so both are certainly capable of taking the reigns for a whole LP.

On Broken Brights, Angus sounds familiar in warm dulcet tones and soft melodic folk songwriting. Akin to Sydney’s Jinja Safari at times with tribal drums on “Be What You Be,” while “Wooden Chair” is like the Angus & Julia Stone we know well, with chanting and whistling lending an upbeat mood. “It Was Blue” is a step into rockier, electrified territory with reverbed vocals, and the title track is a mellow burner with layered harmonies and a country-tinged guitar solo.