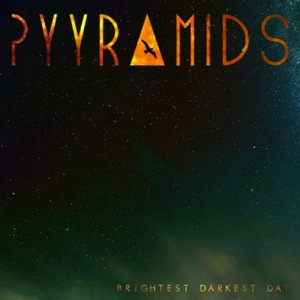 Ignoring the confines of a genre can

be scary work, but when your partner in crime is a already a band veteran and Dave Fridmann

is on board as your engineer, things might just turn out alright. That”s the winning formula of OK Go“s Tim Nordwind and He Say/She Say“s Drea Smith, the makeup of boundary-pushing PYYRAMIDS. It can be tempting to pinpoint a sound on the first track of their first LP Brightest Darkest Day, but just as the droning electronics wind down, the twisting, hypnotic pop of previously released “Don”t Go” kicks in. Then, just as quickly, the slouching guitars and succulent vocals morph into the forward, Yeah Yeah Yeah“s reminiscent “Do You Think You”re Enough?,” which slows into an acoustic fade-out with Smith sounding more like Hope Sandoval than Karen O. There are California garage pop choruses on “Paper Doll” that revert back into their icy, original state, as if cut from The Moon & Antarctica and breezy road trip tunes toward the end, such as “That Ain”t Right.” It seems the most obvious theme on this record is to not be afraid to enjoy your creativity and let no outside force dictate your limits.