ALBUM REVIEW: “Kill Yourself For A Change” by Brigg Fair 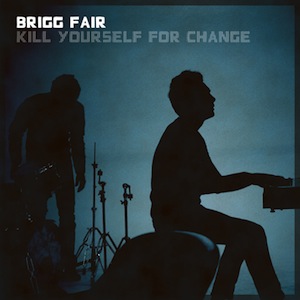 Brigg Fair
Kill Yourself For A Change
[Self-Released]

Geoff Ereth, a Brooklyn native, is the multi-instrumentalist and mastermind behind Brigg Fair, and he probably listens to quite a bit of The Fray. Even the two bands have similar names for their debut album. The Fray’s first album is called How to Save a Life and Brigg Fair somehow decided on Kill Yourself For A Change. So, you can easily see that we’re dealing with similar themes and once you hear the album you’ll see that we’re dealing with similar genres. Or the exact same genre. Your choice.

It’s not meant to be an insult that Brigg Fair thought highly enough of The Fray‘s style to more or less rip it off for himself. We all know that there’s really nothing new in music, but Kill Yourself For A Change cuts it a little too close for comfort.

The piano is at the forefront of every track and seems so important that it even makes an appearance on the cover of the album. Most songs are poetic, but in that juvenile way that you keep hidden away in old high school journals when you fell head over heels for that guy/girl that never paid you any attention. So, yeah, if you’re a fan of The Fray you’re really going to love this album. Should you want an album that’s new and unique, this one probably isn’t for you. Listen below.