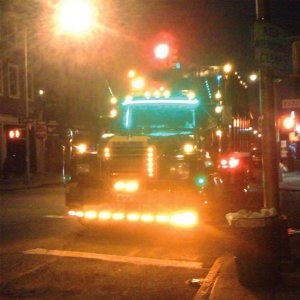 It is hard not to smile when you listen to a Deerhoof album. With a career stretching over a decade, there are eleven albums to choose from to get you to your happy place. The twelfth effort from this San Francisco-based band is no exception. Breakup Song perpetuates Deerhoof’s reputation as the reigning champion of quirky noise pop.

Though each of the eleven songs on Breakup Song are short in duration, the amount of sonic complexity packed into a span of two to three minutes is ear staggering. There is an undertone of restless energy marked by Satomi Matsuzaki’s simple and repetitive lyrics (“Flower”), pulsating electro-generated beats (“Bad Kids To The Front”), and the jittery guitar riffs by John Dietrich and Ed Rodriguez (“Breakup Songs”). These layered components seem to spontaneously combust once the sound waves touch the air but these experienced veterans manage to corral their eccentric energy into an approachable album that doesn’t take itself too seriously. The Latin-influenced “The Trouble with Candyhands” almost immediately brings to mind images of Zooey Deschanel‘s character Jess doing an awkward yet adorable cha-cha on “New Girl.”

You will most certainly be smiling, jumping up and down, and flailing your arms in the air throughout this short 30-minute album. And once it’s over, you’ll want to do it all over again.