“Breaking Away” by Being There 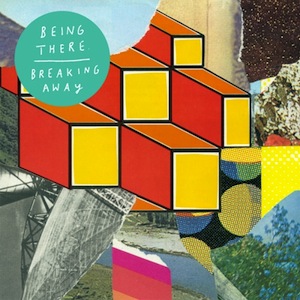 Being There
Breaking Away
[Young and Lost Club]

In both substance and sound, there is no better word for the full-length debut of this Manchester quartet than nostalgia. From the minute the needle touches plastic, the watery guitar fuzz of the aptly-titled “Punch the Clock” wallops us right back into the ‘90s indie scene, complete with those hollow-yet-heavy drums and that British vocal snarl. Being There is indebted to greats a generation removed: Pavement, The Stone Roses, even The Velvet Underground. But Breaking Away, recorded in the here and now, also shows signs of longing for an idealized adolescence that, at its worst, still brims with possibility. Nostalgia, ultra.

The tracks here range from the radio-friendly (“17”) to the simmeringly introspective (“Over Me”). Lead single “The Radio” is an updated “Just Like Heaven,” with singer Sammy Lewis recalling a dream that “still lives on / brighter than the sun.” The gallop of the title track mixes acoustic and electric guitars with power-pop drumming for an accessible highlight of the record.

This is nothing we haven’t heard before, more so a revisiting of a sound than a reinvention of it. Being There’s state of mind appears genuine, though, and if the distorted chords don’t grab you, the desire to hit pause and return to a bygone moment – “going back to the top,” as Lewis puts it – is universally appealing.