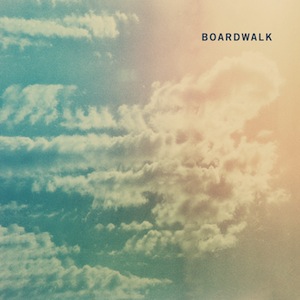 “Dream-pop” is an area we’re always a little wary of. It’s one of those genres where the very best examples are wonders to behold…and the rest very quickly blend into each other. Luck has befallen us though, as Los Angeles newcomers Boardwalk are dream-pop-ers of the very best kind.

Their self-titled debut is a woven delight of melodies and sounds over instrumental layering, often invoking the lo-fi droney undertones of bands like Beach House – particularly apparent in opening track “I’m Not Myself” – and the airy organ melodies of such as Still Corners. Whereas on the clearer, purer sound of the single (and closing track on the album) “I’m To Blame” Amber Quintero’s soft and intimate yet ethereal vocals float above gently plucked guitar strings in a manner not too far from Mazzy Star. Unfortunately, the record does fall into a bit of a formula. The layering and construction of the songs is brilliant, but underwhelmingly similar throughout the album. One highlight is the seventh track, “High Water,” pulled into the spotlight by a hypnotic building psych-feel and a subtle hand with the drums.