ALBUM REVIEW: “Between the Bed Sheets and Turpentine” by Carrie Clark and The Lonesome Lovers 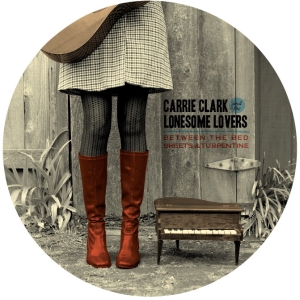 Where has all the country music gone? I’m not talking about the over-dubbed, pop-tarted up, and vocalized with a wince-inducing fake southern accent music that most often streams from radio stations famous for their “country” music. I’m talking about the music that tells a story, a 3-minute peek into someone else’s life written with simple lyrics, three chords on the guitar, and a mandolin playing sweetly in the background. Bluegrass, folk, alt-country: all these are just tags for music that uses the chords to tell as much of the story as the lyrics, if not more.

Seattle’s own Carrie Clark has been labeled with all these tags and she does her level best to hit the high notes of each one, all the while maintaining her own unique style that allows her the opportunity to play with variables. On her fourth release, Between the Bed Sheets and Turpentine, Carrie adds in some dance hall numbers, like “Bum Bah Dum” and “The Night Before,” from whence the title is taken. “The Stranger” would be her taking a turn torch-singing along to slow simmering jazz. “I’m a Lark” is a very sweet bluegrass waltz devoted to freedom of the lark, of course, but it works as an allegory as well. “It Burns,” “Down at My Knees,” and “What Have We Done” rock out complete with electric guitar, with the last number being Carrie’s entry into the protest rock anthem category.

As a singer-songwriter and glockenspiel aficionado, Clark gives much of the credit for this album’s cohesive sound to her band, The Lonesome Lovers (all of whom have a 2-year-plus tenure). Martin Feveyer (Blue Scholars, Zoe Muth, and the Sweet Hereafter) produced the album and encouraged the band to take advantage of their long history of making music together and to play up the versatility inherent in having skilled craftsman in so many instruments: the accordion, glockenspiel, mandolin, ukulele, timpani, piano, steel guitars, and that sexy choice of belly dancer bells.

And let’s not forget the requisite mentions of whiskey, cigarettes, cowboys, and a red-headed woman; all hallmarks of true country music are present and accounted for. For fans of Allison Krauss and Union Station or Alela Diane and the Wild Divine, Carrie Clark and The Lonesome Lovers are a refreshing addition to your music library.