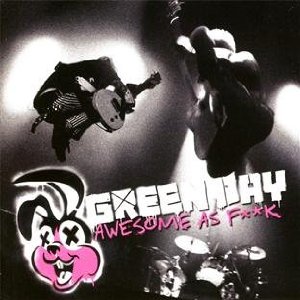 For fans of Green Day, an album like Awesome as F**k sounds like a great idea. Who doesn’t love a live album that lets you relive all of the best times you’ve had at a show. Unfortunately, the live album feeling of Awesome as F**k doesn’t capture the band as well as one would like.

One of the larger problems with live albums is that sometimes the live “experience” dumbs out the tracks. That would be the case here. Tracks like “21st Century Breakdown” are drowned out by the crowd cheering and clapping. When the track kicks in, the screams overpower even the strong guitar line. Some tracks are a little bit better like “American Idiot” where the crowd sings part of the track in place of the band. On the track, you really get the “live” feeling as if you were there. The mastering of the album tries to drown out the crowd but ends up drowning out a bit of the exciting band and drops the crowd out at awkward parts. If you can get past that, all of the Green Day tracks you’d expect are there, including “When I Come Around.”

The DVD does a phenomenal job of capturing the live power of the band. As you watch Billie Joe move around, you really start to feel like you’re in that crowd in Japan. The lights over the crowd and the switching between the band, backstage shots and the audience really put a certain amout of excitement in your belly.

For those who love Green Day, you’ve probably already picked up the CD. But for those still on the fence, pick up the DVD and see how you feel about the album. You might find it is more than enough to tide you over.
login