“Anything In Return” by Toro Y Moi 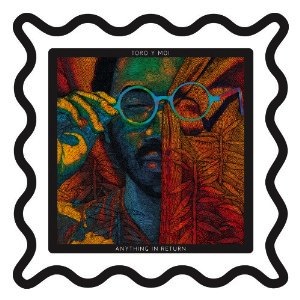 For album three, Toro Y Moi (neé Chazwick Bundick) re-submerges himself into R&B-inspired electronica. Kneepad RPM’s ongoing problem is that many of its makers barely acknowledge the existence of sex. The first half of Anything In Return falls into this trap. “So Many Details” unnecessarily overlaps squeaky synths until they trigger a percussion avalanche. The fact that these innocuous melodies and pensive vocalizations still get ingrained in your memory is a testament to Bundick’s skill at crafting guilty pleasure homages. The pulsating hip-house of “Say That” is a prime example, though it is undermined by a half-hearted refrain of “we’re alright.”

Things liven up around “Studies,” when Toro Y Moi remembers that he is an accomplished one-man disco/folk ensemble. A soft-core boing and some slinky instrumentation herald The Nasty’s late arrival on “High Living.” From there the album gets even cockier, unexpectedly morphing into a modern urban radio playlist. “Day One” is the strongest of these selections, galloping and trundling like a midnight carriage ride while impassioned yelps enthrall an imagined heroine. Anything In Return‘s unabashed chintziness is never dull, but without depth, Bundick’s perpetual identity crisis will soon grow tiresome.