ALBUM REVIEW: “…And So They Ran Faster” by Firehorse 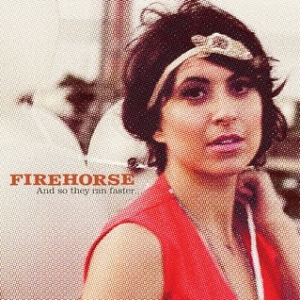 Firehorse
…And So They Ran Faster
[PledgeMusic Recordings]

Firehorse: “When the Chinese zodiac was still determining personalities, women born under the sign of Firehorse were an abomination. A female Firehorse embodies all the abhorrent qualities (according to the culture.) Independence, assertiveness, and a free-spirit.” This is how frontwoman, Leah Siegel, explains the name of her fresh-off-the-block band. Dropping September 27th, their debut album …And So They Ran Faster is nothing short of vocal-driven femme fatale goodness: tough-as-nails with an I-am-woman-hear-me-roar spirit.

Though Siegel says, “there’s nothing on earth that I’m good at,” her vocal chord prowess would smirk otherwise. Drifting into the melancholic grit of 90’s female artist alternative, she reminds me of an ethereal Fiona Apple backed with eerie circus jangles, cathartic lyrics, and sometimes uncomfortable (but in
that intriguing sort of way) soundscapes. A track to especially take note of is “Machete Gang Holiday,” with a rousing catchiness rivaling Local Natives.

Heavy with mood, …And So They Ran Faster is an album best listened to with a few cherry blossom candles, a claw foot bathtub (add the bubbles), and the most engulfing headphones you can sink your head into. A solid effort, Leah Siegel. Looks like you’ve found something you’re good at.