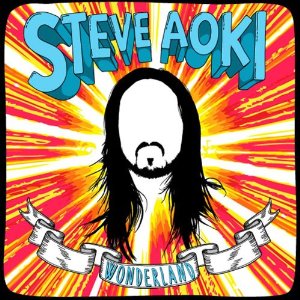 The fact that Wonderland is Steve Aoki’s debut album may come as a shock to the ever-growing audience of college kids and club-goers who have been listening to his singles forever (and to the thousands of people who would be able to recognize him just by his legendary facial hair). But yes, after years of anticipation, Wonderland is finally here: 13-tracks of original Aoki featuring an eclectic mix of mainstreamers as well as lesser-known artists.

There is no doubt that Wonderland is a shift in the mainstream direction for Aoki—Lil Jon, LMFAO, Kid Cudi, and even Weezer frontman Rivers Cuomo all make appearances—and hardcore fans of his earlier work may be disappointed with what could be seen as him starting to sell out. But despite the album’s significantly more poppy, radio-friendly sound, it’s still easy to see Aoki’s roots and talent as a musician. On the album’s first track, “Earthquakey People,” Aoki backs up the slightly misplaced vocals of Rivers Cuomo with satisfying bass drops and an incredibly danceable beat. His collaboration with up-and-coming musician Lovefoxxx, lead singer of Brazilian band Cansei de Ser Sexy, on “Heartbreaker” is effortless and a refreshingly soft track from Aoki that compliments the more upbeat sound of the rest of the album. Other highlights include “Control Freak,” “Emergency,” and “Cudi the Kid.” Wonderland marks a departure for Aoki from his original style into more popular DJ-dom, but his first full-length album reflects his unique ability to infuse more conventional electronic tracks with his own distinct sound.