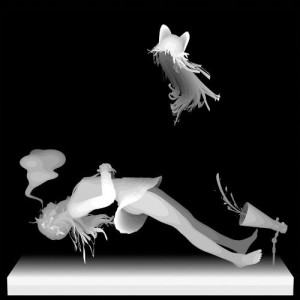 If Player Piano was a 1996 musical theory graduate thesis project called “Contemplations and Projections: Future Musical Trends Based on Past & Present,” I would probably call Dayve Hawk a certified degree in genius. The problem is, I can’t tell if his sound is cheeky or genuine. If cheeky, then I applaud Hawk for not taking himself too seriously and his expert ear for replicating and weaving together every popular sound created since the dawn of the Casio keyboard. If not, well…um…the album may follow the same trajectory as actor Jon Heder, creator of the cult classic character Napolean Dynamite: strikingly original while coming across as effortlessly simple, hard to listen to at times, oddly fascinating, has a few shining moments of brilliance, and then fades away. Regardless, Player Piano is a super weird mix of 8 bit electronic blips and notes. Some more experimental and trance-like while others are straight from an ’80s movie soundtrack especially on “Sunhits,” which is basically an organ version of The Primitive’s hit “Crash.” On most, but not all tracks, we get a taste of Hawk’s vocal stylings, which come in two forms: low rent version of Of Monreal and little brother of Daryl Hall. Not bad. The good news is it’s a fun, cute, upbeat summer album complete with an intro and outro bookend for the obsessive compulsive listener.