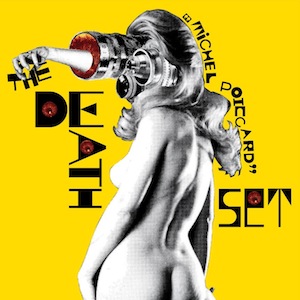 Ever feel like getting yelled at over and over? Yea, me either. But if you’re one of those that do (hey, I’m not judging), you might dig my latest find. Michel Poiccard, the second LP from old school punk meets hip hop meets electronica The Death Set, is something quite unique. I kinda feel like I’m on the verge of having a seizure in a hip hop store with a punk rocker working behind the counter blasting his own tunes while playing Super Mario Brothers.

Alright, so that intro is slightly misleading. Actually, Michel Poiccard from this Brooklyn trio is very bipolar. There are the tracks full of manic screaming: “Slap Slap Slap Pound Up Down Snap,” “I Like The Wrong Way” and “Too Much Fun For Regrets.” There are also tracks of rather mainstream conventional sound such as “It’s Another Day” and “Is It The End Again?” In all, The Death Set produces a sound that I doubt you’ll hear elsewhere. Get it now if you’re itching for your aural bipolar fix.