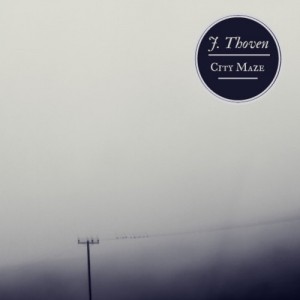 If you have also been patiently awaiting the sophomore follow-up to Local Natives’ Gorilla Manor for a very long time, then J. Thoven may satiate your power harmony withdrawal. While the similarities are strong between these two indie-folk rockers, J. Thoven brings a touch of Nashville to the mix.

After leaving California group Janu & The Whalesharks, frontman Jake Pappas began J. Thoven after a flush of newfound creativity brought on by four seasons and the Nashville air. Mastered by TW Walsh of Pedro The Lion, these cuts have a polished, radio friendly quality that only enhances their value. On opener “City Maze,” Pappas’ voice peacefully pierces the sparse arrangement with the line “I forgot your name / Written on a window pane.” Hints of Fleet Foxes and The Tallest Man On Earth add to the familiar quality of this EP; you could easily slip slow burning “Wake Up Children” onto a Helplessness Blues re-release.

On personal favorite “Wash It Won’t Make It Clean,” Pappas reveals his grittier side, “There’s blood on my jeans / ever since I turned 18 / the washer won’t make them clean.” Fueled by a successful Kickstarter campaign, J. Thoven is a DIY project with a boat load of heart, soul, and harmony. Take the time to check out this rising group – they have everything in the right place for success.