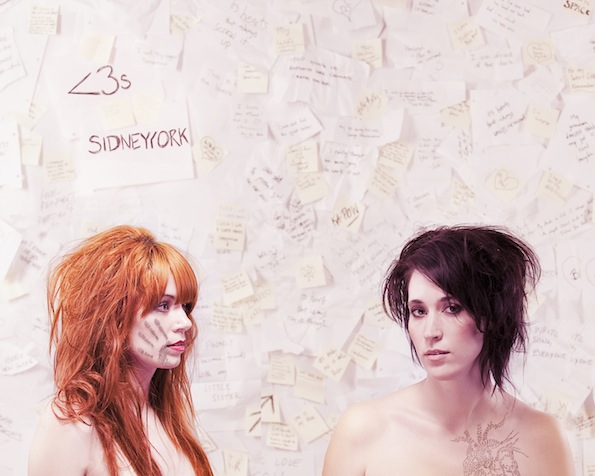 Sometimes, long distance relationships can be productive. The quirky Canadian musical duo Sidney York began as such, between opera singer Brandi Sidoryk and bassoonist Krista Wodolet. That description explains nothing of what goes on the <3s EP, a concise 5-song synth-pop creation with neither operatic vocals nor much bassoon. In fact, opening song “Dick & Jane” may also lead the listener astray. Beginning with a ukulele strum that Ingrid Michaelson would appreciate and drums worthy of a Lumineers tune, “Dick & Jane” soon turns into one smart pop song. Cute, smiling lyrics play well with a high-stepping electric bass, a whistling hook, marching bassoon, and a pleasant undercurrent of synth buzz.

But the acoustic feel disappears immediately on “Hearts,” which drives the rest of the album into Mates of State territory: Highly produced and dancey. Unfortunately, that change-up also takes the surprise out of the pop. These are two music geeks working with mostly electronic instruments, and despite the sophistication of the arrangements, nothing new is being done here. On a song like “Electrolove,” an attempt to sound futuristic, the duo simply comes off cold, losing all the human warmth of that first, wonderful tune.

<3s EP is a precursor to a full album, to be released as five two-song volumes. If the remaining five songs match up to “Dick & Jane,” this band might just demand your attention.